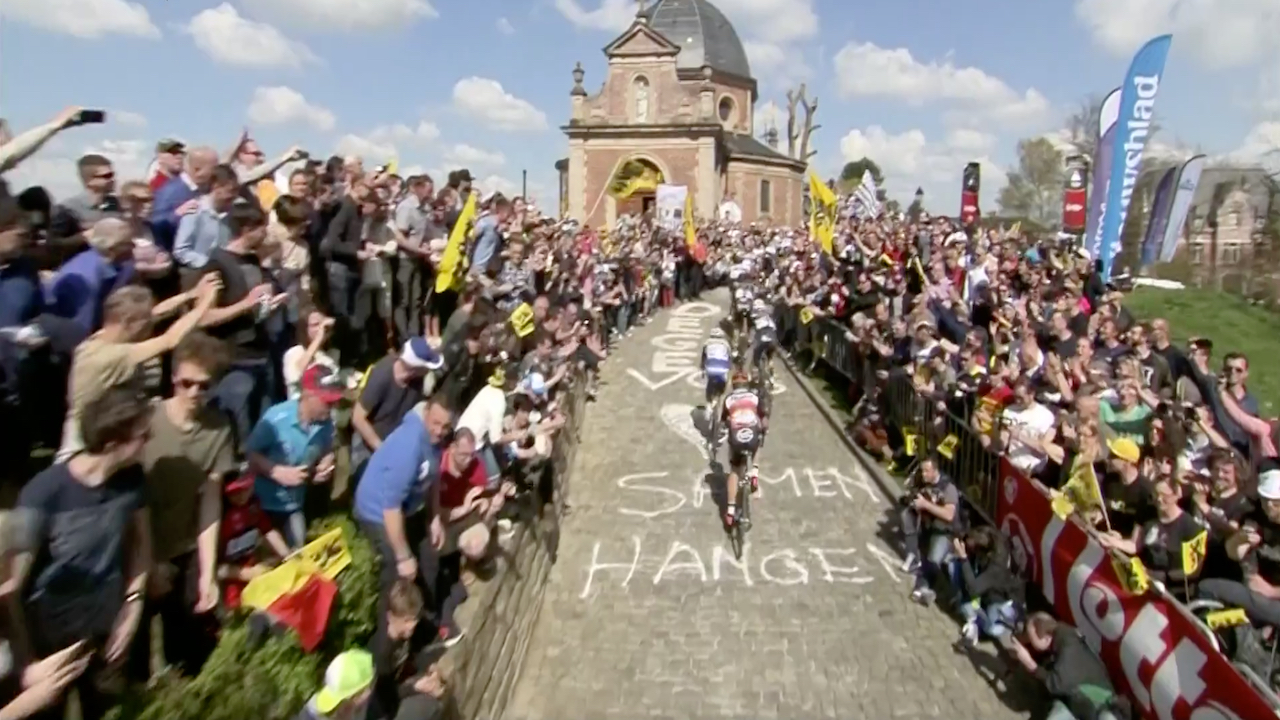 
The 2017 Tour of Flanders (Dutch: Ronde van Vlaanderen 2017) was the 101st edition of the Tour of Flanders, a one-day cycling classic, that took place on 2 April 2017. It was the second monument race of the 2017 cycling season and the thirteenth event of the 2017 UCI World Tour. The race marked the pinnacle of the Flemish Cycling Week.

Philippe Gilbert (Quick-Step Floors) won the 2017 Tour of Flanders, but that simple statement doesn’t even begin to tell the tale of one of the most remarkable editions in the race’s history, and certainly the least predictable on the new finale over the Oude Kwaremont and Paterberg.

Gilbert was alone for the final 55 kilometres of the race, having broken clear on the second ascent of the Oude Kwaremont – and that after being part of an elite selection that formed on the Muur 40 kilometres earlier – but that is still only part of the story.

The race will be remembered, too, for the bizarre crash that ended the challenge of Peter Sagan (Bora-Hansgrohe) as he gave chase on the final ascent of the Oude Kwaremont. The world champion clipped a roadside barrier and brought down Greg Van Avermaet (BMC) and Oliver Naesen (AG2R La Mondiale).

Van Avermaet got back up and still won the sprint for second place, ahead of Niki Terpstra (Quick-Step) and Dylan van Baarle (Cannondale-Drapac), 31 seconds down on Gilbert. It was that kind of a race, that kind of a day.

Sagan and Van Avermaet were 55 seconds behind Gilbert at the base of the Kwaremont, and the Belgian champion still had the bulk of that lead in hand even after Sagan accelerated near the summit. We will never know if Gilbert would have held out without the crash, but that detracts not one jot from his triumph. Gilbert, for his invention and his startling strength, was well worth his victory at the end of an absurd bike race.

Quick-Step wanted to avoid going toe-to-toe with Van Avermaet and Sagan in the finale, and their approach was flawless. The Muur van Geraardsbergen, back on the route after a six-year absence, proved pivotal even though the old friend was positioned some 95 kilometres from the finish. Tom Boonen, riding his final Ronde, set a fierce pace on the climb, and his effort brought a group of 14 clear, including Gilbert and Matteo Trentin. With Sagan and Van Avermaet caught behind, the Quick-Step trio didn’t need a second invitation to put their shoulders to the wheel.

“It all started on the Muur. I was riding on Tom Boonen’s wheel and it went on from there,” Gilbert said. “We had three riders in the group and we decided to push on.” When they reached the Kwaremont forty kilometres later, Gilbert opted to follow the same principle. He punched clear midway up the climb, and simply opted to continue alone when it was clear that nobody could come close to matching his speed.

“On the Kwaremont, I decided to go full on. I made an effort and I looked behind and I was alone,” Gilbert said. “So I just went on from there.” As simple and as brutally complicated as that.

There was, eventually, a general regrouping behind, though, as ever, the Ronde proved an elimination race. Sep Vanmarcke (Cannondale-Drapac) and Luke Rowe (Sky) were thwarted by crashes, and Boonen by a mechanical mishap on, of all places, the Taaienberg.

With 35 kilometres to go, the race finally seemed to be settling into its anticipated script, as Sagan and Van Avermaet went clear over the Taaienberg in a chasing group that swelled to include Van Baarle, Naesen, Yoann Offredo (Wanty-Gobert), Trentin and Fabio Felline (Trek-Segafredo), and this septet hit the base of the Kwaremont for the final time just under a minute down on Gilbert.

When Sagan took up the reins near the top, only Van Avermaet and Naesen could follow, but in an instant, their already guttering hopes were extinguished. Sagan struck a barrier at the roadside – it seemed as his bike was hooked by a billowing advertising banner – and Van Avermaet and Naesen came down with him. Van Avermaet remounted immediately, while Sagan waited for a replacement bike, knowing his chance of a repeat Ronde was gone.

Up ahead, Gilbert betrayed his first signs of suffering on the Paterberg, where he struggled to keep his gear turning over, but he crested the summit with 50 seconds in hand on a chase group made up of Van Baarle, a bloodied Van Avermaet and his Quick-Step teammate Niki Terpstra, who came from a long, long way back to bridge up.

At that point, Gilbert looked every inch the winner, but the ferocity of Van Avermaet’s pursuit, allied to a stiff headwind, made for a nervous spell around the 5km-to-go banner, when seconds began crumbling off his advantage.

By the flamme rouge, however, Gilbert had steadied the ship, and he could sit up and celebrate his win as he pedalled up the long finishing straight in Oudenaarde. On crossing the line, Gilbert stepped off his bike and lifted it over his head. It was a wonder he had the strength to do so.

“I was aiming for the win but it didn’t work out,” Van Avermaet said. “On the Muur I was a bit far behind and I didn’t see what happened when that group went past. I was riding a very strong race and we were chasing very hard, but some people weren’t contributing to the chase. It was better when we got to the final – once you get away there, you can take some time back. But Phil had a minute by then, and it was very hard.”

Gilbert hadn’t raced the Ronde since 2012, as BMC had preferred to deploy him in the Ardenns to give Van Avermaet sole leadership on the cobbles. On signing him for Quick-Step Floors during the off-season, Patrick Lefevere had no misgivings about adding another potential leader to his Ronde line-up. He clasped Gilbert in a hug by the podium. “Mamma mia,” Gilbert said.

The 101st edition of the Ronde van Vlaanderen was the start of a new era, as Antwerp hosted the start of Vlaanderens Mooiste for the first time, after 19 years in Bruges. Pleasant spring sunshine and thick crowds greeted the riders in the Grote Markt, where Boonen, on the verge of his retirement, was feted with the ‘Viking clap’ celebration popularised by Iceland’s supporters at Euro 2016 last summer.

From there, BMC and Bora-Hansgrohe took the initiative to keep the octet under control, with the pace in the peloton eventually rising after the first ascent of the Kwaremont, with 144 kilometres to go. A number of nervous crashes took place, too, as the peloton bottlenecked on narrow roads, with Taylor Phinney (Cannondale-Drapac) among the victims.

The eight leaders reached the Muur van Geraardsbergen with a lead of more than five minutes, but all eyes were on the main peloton, where Tom Boonen was setting the tempo. The Muur, back in the race after a six-year absence, may have been a long way from the finish – some 95 kilometres – but it proved to be a pivotal moment in the race. Boonen’s forcing split the peloton into several groups and when the dust settled, the Belgian was joined by teammates Gilbert and Matteo Trentin in an elite 14-man selection that also contained Sep Vanmarcke (Cannondale-Drapac), Alexander Kristoff (Katusha-Alpecin), Maciej Bodnar (Bora-Hansgrohe), Arnaud Démare (FDJ), Luke Rowe and Gianni Moscon (Team Sky), Jasper Stuyven (Trek-Segafredo), Bryan Coquard, Sylvain Chavanel (Direct Energie), Pieter Vanspeybrouck (Wanty-Groupe Gobert) and Sacha Modolo (UAE Emirates).

The big absentees were Sagan and Van Avermaet, and they trailed by 1:10 when the Boonen-Gilbert group caught the early break with 67 kilometres remaining. Boonen and Trentin were particularly active on the front, eager to ensure they stayed clear until the second ascent of the Kwaremont, knowing that no one team would be able to marshal a chase on the succession of hills that followed.

They had 35 seconds in hand at the base of Oude Kwaremont, where, with 55 kilometres remaining, Gilbert went clear alone, dropping Vanmarcke and the others. By the top, the Belgian champion was 56 seconds clear of the peloton, and he opted not to wait for company.

The race, initially slow-burning was now fully ignited. On the fast descent before the Paterberg, Vanmarcke crashed and brought Bodnar and Rowe down with him. On the Paterberg, Sagan, Van Avermaet were to the fore, and their efforts helped the the peloton to bridge back up to the Boonen group.

Come the foot of the Koppenberg, Gilbert had a lead of 55 seconds on the main group, an advantage he maintained over the Steenbeekdries and Taaienberg, but again, the drama was behind. The climb, nicknamed the ‘Boonenberg,’ marked the end of Boonen’s challenge. A chain problem forced him to stop for a bike change, and when his replacement machine also proved problematic, he knew his chances had disappeared.

At the head of the group, meanwhile, Sagan launched his first telling acceleration, and only Naesen, Van Avermaet, Trentin and Yoann Offredo (Wanty-Groupe Gobert) could follow, and they caught earlier attackers Van Baarle and Fabio Felline (Trek-Segafredo) over the top. They were a minute down on Gilbert over the Kruisberg, and the situation remained static until they reached the Kwaremont, where, suddenly and dramatically, this most incredible Tour of Flanders took on another guise.

Touchingly, Gilbert dedicated his victory to the late Claude Criquielion, who was the last Walloon to win the Tour of Flanders, 30 years ago. “I thought about him a lot on this special day,” said Gilbert.

His 2012 world title notwithstanding, Gilbert had seemed in steady decline since his startling 2011 campaign, but at 34 years of age, the Belgian has somehow conjured up the greatest performance of his career. After the Tour of Lombardy (2009 and 2010) and Liege-Bastogne-Liege, he has now won three of cycling’s Monuments, and he vowed to try to complete the set.

“I want to win all five,” he said. “I’ve gone close at Milan-San Remo and I’ll have to test myself at Paris-Roubaix, but my career is far from over and I want to realise this dream.”

I’m not sure what’s going on. When I select the Tour of Flanders 2017 race link above it sends me to a “Page not found” bitly site. ??

Please support this website by adding it to your whitelist in your ad blocker. ADS and DONATIONS are what helps me bring you quality cycling videos! Thank you!
wpDiscuz